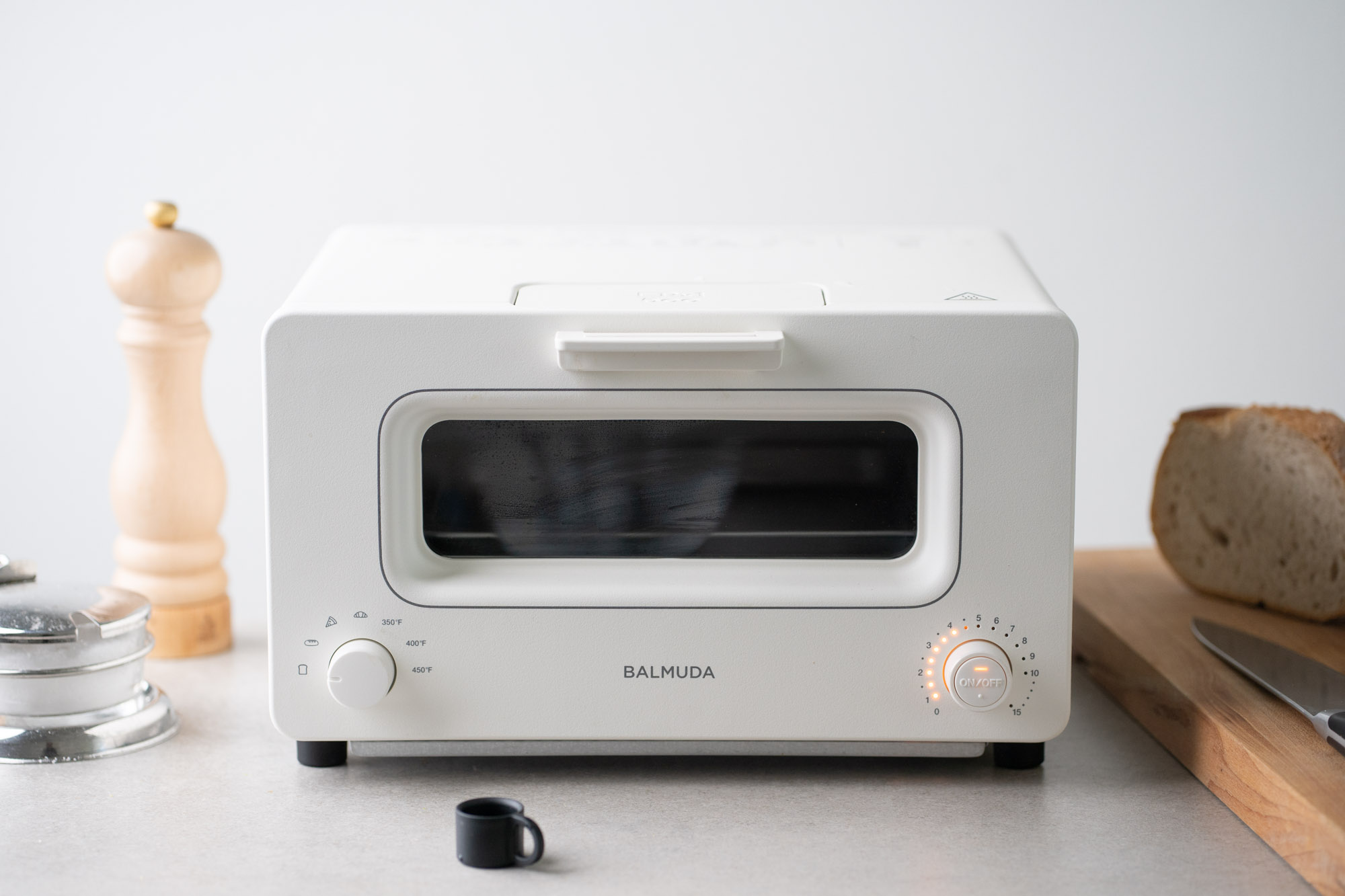 Gadget lover, food nerd, toast connoisseur--all things I strive to be. At around $300, this highly specialized, compact, and attractive looking metal box piqued my interested. Balmuda's "The Toaster" had a line of enthusiasts waiting for its release on US soil, and now that it's available, I had to see what the fuss was about.

Balmuda is a Japanese company that emulates Western technical innovators, and in 2015, they launched their steam toaster oven, simply called The Toaster. It wasn’t even marketed to consumers, but it sold out almost instantly, and Tokyo toast fanatics had to wait three months before they got their hands on one.

Fans got the word out that the Balmuda toaster makes your morning toast a religious experience, and soon toast-lovers worldover were clamoring for one. But unless you hopped on a Japan- or Seoul-bound jet (a Korean-language version was released at the same time), we Americans missed out.

In 2019, Mitsubishi introduced its own toaster – or, rather, “bread oven” – that alternates heat between the top and bottom heating elements at temperatures that can hit 500℉. You get a super crunchy exterior and a soft, yielding interior.

The problem though is that you can only make one piece of a toast at a time, all for the price of $270. But it’s got its share of raves on Amazon by folks who find nirvana in a single – albeit, perfect – slice of toast.

In April 2020, Balmuda finally released The Toaster in the U.S., and despite its $300 price tag, Americans have been snatching them up. It was about time that I got one and find out if this techie marvel lives up to its hype.

Steam function & how the toaster works

So why is Balmuda toast purportedly the best toast you’ve ever bit into? The toast I made in the Balmuda was cracker-crispy on the outside and soft, slightly chewy on the inside. This dual texture is apparently the Holy Grail for people whose lives revolve around toast.

The Balmuda functions much differently from a regular toaster. It all comes down to the steaming action combined with alternating high heat from the top and bottom heating elements.

Before toasting, you need to pour 5 cc (or 1 teaspoon) of water – a tiny measuring cup is included – into a small slot on the top front of the toaster. Then you choose one of four modes – sandwich bread, artisan bread, pizza, or pastry – set the timer (usually 3 to 5 minutes), and press start.

Like a convection oven, the Balmuda heats up very quickly, and the 5 cc of water turns into steam, which envelops the piece(s) of bread (or other baked goods). This steam bath retains the bread’s internal moisture throughout two-thirds of the programmed time. The top and bottom heating elements alternate a few seconds, then pick up speed, and pretty much look like disco lights. For the final 30 seconds, only the top element stays on and finishes browning the toast.

You don’t have to use steam – in fact, you shouldn’t use it in the baking mode – and the Balmuda works like any other toaster or toaster oven. However, the four toasting modes all require steam, even if you’re just browning a cheese sandwich. Otherwise, the bread will dry out to a gummy consistency that will get stuck in your teeth.

Can you toast other food in it?

There are tons of YouTube videos of people toasting food other than toast in the Balmuda, and the Balmuda website also has several non-toast recipes.

A handful of Balmuda’s recipes – like roast beef and turkey casserole – are baked.The remaining 90 percent are toast recipes that you top with cooked food, like the silly recipe for Breakfast Curry Toast: Make curry, make eggs, put them on toast.

One intrepid YouTuber cooked a single piece of fish in the Balmuda, using the pizza mode, and her result was a tender, moist fish with super-crispy skin. So, yes, if you don’t mind experimenting with the Balmuda, other types of food can be toasted.

Can you bake in the Balmuda toaster?

Yes, but mainly there are a few restrictions. The Balmuda has a baking mode with only three temperature settings: 350℉, 400℉, and 450℉. If you have a baking recipe that requires a lower, higher, or a temperature in between, you have to wing it, particularly figuring out timing.

The Balmuda’s interior measures 10.75” wide and 8” deep, so it can only fit a very small baking tray or oven-proof baking dish. The included baking tray measures 10.25” by 7.25” and fits snugly inside the toaster. The actual cooking area in the baking tray is only 8” by 6”, so you could bake four to six cookies or one or two portions of chicken.

Another drawback is that the baking tray sits just 3” down from the top heating element. So when baking anything that rises, like yeast bread or dinner rolls, it will burn on top.

However, since many prepackaged frozen foods are baked at 350℉ or 400℉, the Balmuda is great for baking frozen mac and cheese or a single-serving frozen lunch or dinner.

How we tested & results

I really wanted to give the Balmuda a workout, so I selected a variety of breads – fresh, stale, and frozen – pizza, and pastry to test the steam-toast method. There were a couple of duds, but overall I was impressed.

The Balmuda was designed to fit in small kitchens. It measures 13.5” wide, 10.75” high, and 8” deep, about the size of an old-fashioned bread box. It comes in four colors – black, white, gray, and taupe – and can blend in with any kitchen design. I ordered the white, and it’s not a true white but a light cream.

The knob on the left front of the toaster is for choosing the four toasting modes and the three temperatures for baking. The knob on the right front is for power and programming toasting time in 30-second increments. When the toaster is plugged in and powered on, the timer lights up, and when the knob is turned clockwise, it clicks at every increment. The instant you select the time, the toaster starts.

The Balmuda comes with a pre-installed crumb tray, a grill rack that sits on top of the lever that opens the toaster door, and the aforementioned baking tray and 5 cc (or 1 teaspoon) measuring cup. A thin instruction booklet is included, and if you lose it, the icons for toasting mode and suggested toasting time are etched on top of the toaster.

I like the design and aesthetic of the Balmuda; it’s unassuming and can fit anywhere, even in a kitchen cabinet. One design flaw is it has no place to store the eensy measuring cup, which would be easy to misplace or lose in a drawer.

Obviously I was intrigued to see what all the fuss is about, so my first test was toasting two slices of white sandwich bread. Balmuda recommends 2.5 to 3.5 minutes for toast, which, for me, is vague. Considering the technical design, you’d think Balmuda could have been more specific, i.e. 2.5 minutes for light toast, etc.

I like well-toasted toast, so I guessed that 3 minutes should do the trick. The top of the toast was a beautiful deep golden with browned crusts. The bottom, however, was pale with a few brown grill marks.

I wish the toast tasted as good as the top looked. It did have a nice crunch, but the interior was chewy and not pillow-fluffy as promised.

I repeated the test with fresh bread and frozen bread and got the same results. Stale bread was not rejuvenated and was even more difficult to chew.

I was seriously disappointed and wondered if I had done something wrong. I had, as it turns out. Sandwich bread in Japan is double the thickness of American Wonder Bread. So I grabbed a loaf of thick brioche, and my first Balmuda experience was forgotten (nearly).

Let’s face it, you’ll never get even a mini-size, personal pizza to fit into the Balmuda. It has a pizza mode, but it’s only for reheating a single slice of leftover pizza. Maybe you could squeeze a second slice onto the baking tray, but as the cheese is heating, you’ll get globs of it falling off the sides and onto the toaster bottom.

My gripe about size aside, it reheated my day-old pizza perfectly. The pizza mode increases the temperature on the top heating element, so it crisps the top pizza crust and brings oozy, juicy glory back to the toppings. The bottom crust came out a little soft, but that didn’t stop me from thoroughly enjoying my slice.

Bagel: I’m surprised that more isn’t made about the Balmuda’s way with a bagel. Most new toasters have a bagel function; Balmuda doesn’t. Instead, per Balmuda’s instructions, you toast a bagel using the pizza mode.

We tested a fresh and a stale bagel and got the same excellent results. The cut side toasted golden brown and crunchy, while the underside had the requisite chew.

Pita bread: Because the pita bread is so thin, I didn’t expect much from the Balmuda. I thought it would just be toasted but too hard to stuff. Again, the Balmuda proved me wrong. Not only was the pita hot and toasty, but the interior was warm and soft and totally addictive.

Cornbread: We attempted to reheat two defrosted pieces of cornbread, about 1-½” thick, as a test for the pastry mode. The exterior was nicely warm, but the interior was cold. We tried again with a second piece, cutting it in half, and tried the pizza mode. It was a little better but a bit dry.

As I said earlier, you can’t bake a bread or roll that rises high in the Balmuda, since the top will get burned by the low heating element. As an experiment, though, I put a quarter-inch-thick,  5” by 5” square of frozen puff pastry on the baking tray lined with parchment paper.

I set the temperature at 400℉ and baking time for 15 minutes. To my shock, the puff pastry went from frozen to puffed-up golden-brown flakiness in only 5 minutes.

Finally, I tried baking frozen chicken nuggets and again got great results in half the baking time suggested by the packaging. The chicken was moist and because I turned the nuggets over once, both sides were crispy.

The bottom line: is it worth it?

The Balmuda toaster isn’t just for toast, and its versatility won me over. Three hundred bucks is a lot to ask someone to plunk down for what’s essentially a toaster oven. But it’s definitely one of the best toaster ovens you could buy. The Balmuda’s steam technology isn’t just a marketing ploy; it really works.

The Balmuda’s small size does limit how much food you can prepare at one time. It’s ideal for a quick breakfast or lunch and a one- or two-person entree or side dish for dinner. The Balmuda has such a small footprint, you could put it pretty much anywhere.

It’s a great toaster oven for singles or couples who have tiny kitchens. But honestly, I think most everyone will appreciate the Balmuda for its design, technology, and functionality.

Will the Balmuda change your life? Maybe. But it will certainly change your opinion about a toaster oven. The Balmuda is an investment worth making.