Bánh giò is a originally a steamed street snack from Northern Vietnam. It’s a small, savory snack great any time of the day, made with a rice flour outer layer, ground pork, mushroom and onion filling and all with a special aroma from a banana leaf wrapper.

I learned this recipe and technique from my Mom many years ago. Many steps are involved in this recipe, but they’re pretty simple to follow. These are best made in larger batches due to the atypical usage of banana leaf and a large steamer, but are well worth the effort!

Bánh giò was originally cheap street food, so it’s not really something restaurants easily profit from. These originate from Northern Vietnam, and my mom remembers them like many other foods there: it contained very little meat which would have  It was very modest but delicious snack really worth looking forward to.

Variations you’ll find in the States nowadays reflect our contrasting food supply. These bánh giò will have a much higher filling to rice ratio, and some even feature quail eggs.

What Does Bánh Giò Mean?

There’s not often a direct translation into English for Vietnamese recipes or dishes. For instance this is sometimes referred to as steamed dumplings.

When I think of dumplings I think of ready to eat, bite sized little bites of (usually meat) filling encased in some kind of wrapper. This has an inedible wrapper, but contains filling encased by a flour paste rather than a wrapper–it loosely fits the bill. The literal meaning of bánh giò is “pork cake” which doesn’t exactly translate into the English in an appetizing way.

Jicama is pictured here which is not in our recipe. Feel free to substitute meat with jicama at a 1:1 ratio if you want less meat and more crunch texture in the filling.

A Unique Part Of Vietnamese Cuisine

There are very few Vietnamese dishes that feature this kind of rice flour paste mixture. One of which is Hue’s banh nam/banh la. These are flatter cakes an wrapped and steamed in banana leaf.

Banh nam uses tapioca flour, rice flour, but zero corn starch, and the filling is made primarily of shrimp instead of pork. Banh beo is a similar twist on this as well.

You may often see the outer layer also wrapped in plastic wrap, or aluminum foil for reinforcement during cooking. But if you’re going to plate this or gift it they look much nicer with the banana leaf layer exposed.

Places around here near Little Saigon in Southern California like Đức Hương Giò Chả will sell this, along with many other Northern foods. You can get this at quick takeout shops like the Bánh Mì Chè Cali chain of stores, or even at counters at Vietnamese supermarkets.

The goal here is to impart flavor and aroma into the rice flour layer, and make it look good. We also want to make sure this dumpling stays together during cooking and doesn’t drip all over your steamer.

The inner wrapper is banana leaf which varies in quantity, but you’ll typically see variations for the second outer layer. I typically see people using either a plastic wrap or aluminum foil.

This inner wrapper is banana leaf since it adds flavor to the rice flour, aroma and visual appeal. One layer isn’t enough to safely keep the dumpling together during cooking, so you can add a few more layers of leaves to reinforce. In Vietnam only leaves were used since they were so cheap and readily available, but the same does not hold true here..

For stability with an outer layer, instead of using more leaves you can use aluminum foil as a cheaper alternative. Some shops will use plastic wrap as their outer layer because it’s even cheaper. However, I try to avoid heating up plastic that makes contact with food for health reasons. Since foil is pretty cheap, let’s go with that.

To prep the banana leaves, scrub them under running water, dip them one at a time into a pot of hot or boiling water to slightly soften them, then drain in a basket. The boiling cooks the leaves a bit so its easier to wrap, and so its less likely to tear when you cut it to size for wrapping.

You can do this in advance the day before if needed, but this step is mainly to clean the leaves and trim out the leaf stem/ribs since they are tough to fold.

Making the rice flour mixture is pretty simple, however there is some estimation you’ll need to do. The above photo shows the final consistency of the flour mixture you want, but you may have to adjust timing based on the pot you use, the power of your stove, the temperature of the water you use, etc.

But the main goal of heating this mixture is to incorporate the ingredients and par-cook the flour so it reaches a consistency that’s thin enough to remain easily spreadable but thick enough so that it can support the filling inside, and doesn’t spill everywhere while you try to wrap the dumplings up.

The traditional and more common shape for bánh giò are pyramids. It takes a little bit of practice to master but I think they look a little fancier and more enticing to eat.

Any wrapping shape is fine though in terms of cooking or serving. The pyramid is a little more complicated, but fun if you’re into that crafting kinda stuff. You can do little rectangular packets (like the two in first photo of this post).

There are molds for this if you need assistance getting a proper shape. Here’s a photo of some molds my uncle brought back from Vietnam. These are triangular looking ones–not quite a pyramid. But there are versions with and without a base if you’re into that.

Aand again here’s what they look like wrapped by hand after being steamed and ready to eat!

Here, my mom shows us one of her methods for wrapping pyramid shaped bánh giò. This example doesn’t have foil in the initial steps for the outer layer which you can do if you’d like. Note there is no spoken audio!

One of my aunts is also known to forgo the wrapping entirely and just assemble these into heat safe bowls and put them directly into a steamer to cook. You won’t get the banana flower aroma, but it’s much easier and it works well! 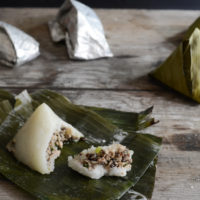 Preparing Wrappers (You can do this a day a head) 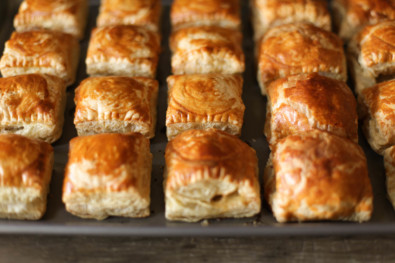 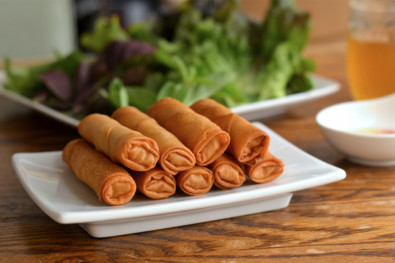 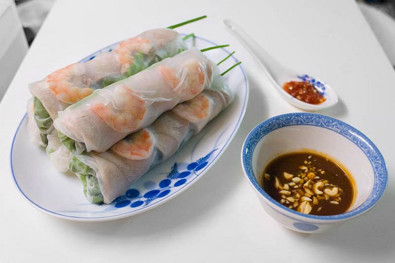 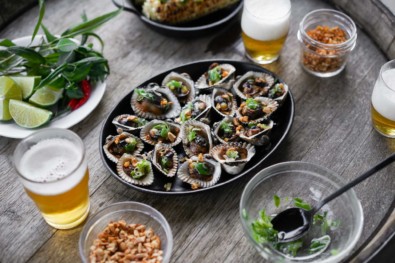 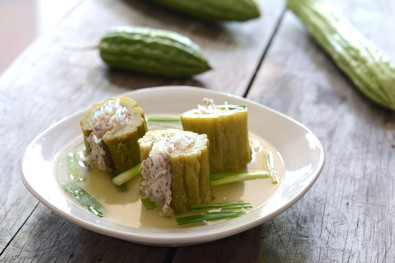 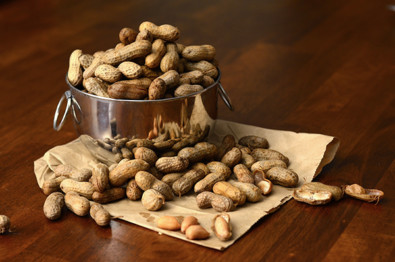