None other than the late Anthony Bourdain claims sisig is the best drinking food, while others will fight with you that nothing beats Korean Fried Chicken for that seat. But in both cases, we all win. With this recipe, learn how to make sisig and treat your guests at your next BBQ!

Sisig is a well known Kapampangan dish (or a dish from the Pampanga, Philippines), and it’s culinary history has evolved from a sour salad or snack to a sizzling and crispy savory pulutan, or “drinking food,” served with beer.

Sisig was originally a remedy to treat nausea or hangovers because it included a combination of sour and vinegared food–something that is still very prevalent in Filipino culture. I have a lot of memories of only eating green mangoes with salty fermented shrimp during my mom’s pregnancy with my sister.

It wasn’t until the 20th century that the sisig queen herself Lucia Cunanan, or “Aling Lucing,” gave us our modern take on meat-centric sisig we know of today. Cunanan used the leftover pig’s ears and other unwanted pieces of meat from the American Clark Air Base in Pampanga, chargrilled them over coals, chopped them into small pieces, and mixed it all up with citrus and vinegar juices.

Sisig further evolved with the addition of the hot sizzling plate to serve the dish on to prevent it from getting cold. You can find many different variations of sisig today where people add mayonnaise, include chicken livers, tuna, and more.

Aling Lucing included fatty cheek pieces with the pig’s ears and if that doesn’t sound like some of the best drinking food, I don’t know what to tell you. I have some fond memories of eating sisig at a local karaoke bar in Cebu with my cousins and it’s the best way to eat it–with good friends and family, just relaxing and eating.

These days, many Filipino American restaurants feature sisig as a staple and my favorite to get when I’m visiting home is Papa Urbs. Obviously, this isn’t a typical option when I’m craving sisig so I learned how to make it at home! Making sizzling sisig at home is a great option for parties that give your guests a special treat especially during summer bbqs.

Cuts of pork to use

While Aling Lucing had an unfortunate fate, she will forever be remembered for her contribution to Filipino food through sisig. Because she was able to take the pieces of pork that were unwanted by the air base (pig’s ear/face/cheek) and remake them into completely new dishes, we’re able to enjoy sisig.

For this recipe, I chose pig’s ear (which you can easily find in Filipino grocery stores like Seafood City or other Asian markets) and pork belly for the extra fatty flavor. You can also add different pieces of pork like the pork cheek, liver, snout, or pork shoulder/butt. These days, I have also seen other variations like chicken or tuna, too. For this recipe, I wanted to stay simple and more traditional.

One thing I do recommend is braising your meat before grilling it to make the meat softer, especially the pig’s ear. While this adds an extra step, I prefer doing this to get juicier pieces of meat. I also grilled the meat over a charcoal grill for better flavor. Then, I finished the meat on a cast iron pan directly over the grill to get a nice crispy texture.

It’s a bit odd to me to explain the toppings as a sauce, since it’s more like a dressing (like a traditional salad). The dressing itself is a mix of fresh limes (or calamansi if you can find it), soy sauce, salt, and pepper.

Try to use fresh citrus juice if possible because it really helps cut the fattiness of the pork. While some people use mayonnaise in their sisig, I like to keep the dressing fresh and focus on the citrus flavor with a simple dressing.

I like to add purple onions for a nice sweet flavor and crunchy texture at the end of pan frying. If you like spice, you can also add some thinly chopped peppers too. I serve on a sizzling cast iron plate to make sure the sisig meat stays hot and crispy–there’s nothing worse than cold and hardened meat.

Sisig has a combination of savory and fatty flavors from the grilled pork with a nice layering of fruity citrus from the limes (or calamansi) and sweetness from the purple onions. It’s as close to a crispy meat salad as you can get!

Why is it called sisig?

Sisig comes from the word “sisigan” which means to make something sour. 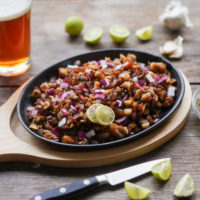 5 from 2 votes
This hot and sizzling dish of crispy pork mixed with a fruity citrus dressing is an amazing dish for your next BBQ. A very popular drinking dish, but great on its own too!
PRINT PIN
BY: MG Sanchez
Prep: 5 mins
Cook: 1 hr 15 mins
Total: 1 hr 20 mins
SERVINGS: 6 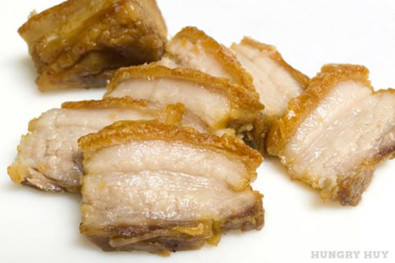 How to Make: Lechon Kawali (part 2) 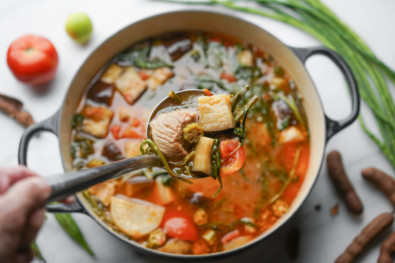 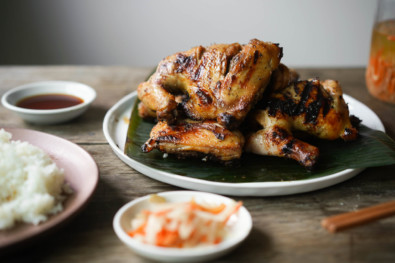 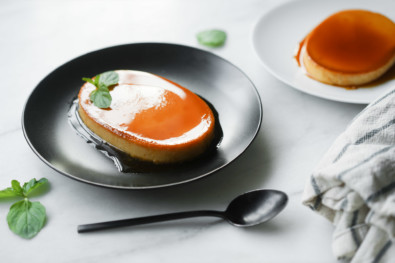 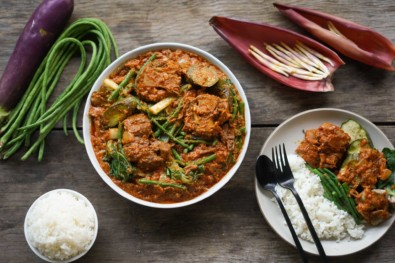 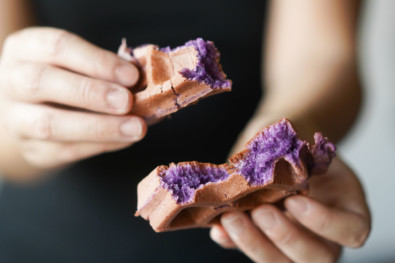